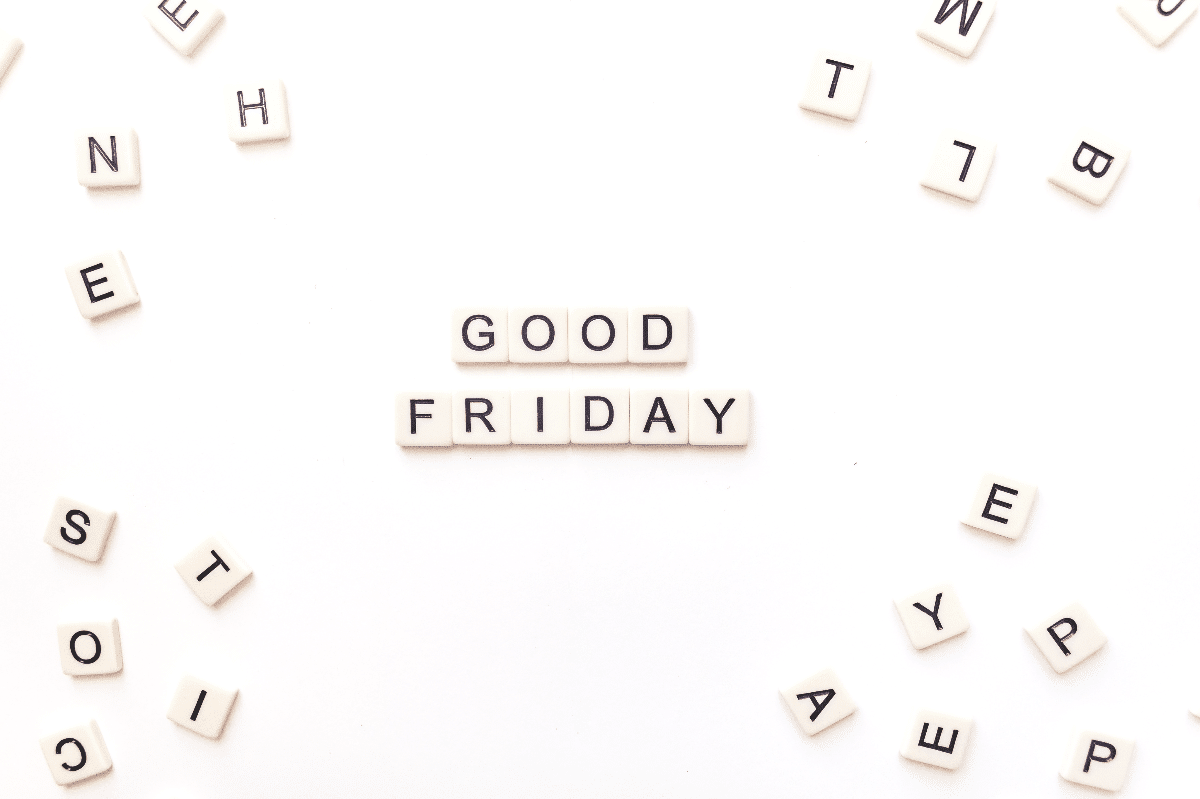 Most countries around the world celebrate Good Friday and consider it a national holiday.

Good Friday is the anniversary of Jesus’ death.

As stated in the Bible, Jesus was put to death on the Friday before Easter. Generally, this day coincides with the Jewish Passover holiday.

This is the only way to save His people and reunite with Him.

What is Good Friday? Why is it called “Good” when it is a horrible, dark, and unwelcoming event leading to the suffering and death of Jesus Christ?

As early as the first century, celebrating “Good Friday” was set as an extra special day of prayer. This is a remarkable event, yet the crucial day of the year. It’s about remembering and honoring what people believe to be the most fateful history of the world.

After Jesus died and was raised, Christians declared the cross and resurrection of Jesus to be the critical turning point for all creation. Paul regarded it to be “of first importance” that Jesus died for our sins, was buried, and was raised to life on the third day as the Scriptures said. (1 Corinthians 15:3)

There is no definite day in commemorating Good Friday. Christians started to observe the Friday before Easter which is related to Christ.

Formerly, it was described as Holy or Great Friday by the Greek Faith. The name “Good Friday” was already embraced by the Church of Rome around the sixth or seventh century.

Good Friday is the day that Jesus suffered and died for everyone by crucifixion as his ultimate sacrifice for our sins. It was followed by Easter, which was the great celebration of the day Jesus rose from the dead. Announcing his victory over sin and death by looking forward to the future resurrection and becoming united to him by faith.

In the Bible, Good Friday accounts for the trial, torture, and crucifixion of Jesus Christ and this happened between 4-7 B.C.E in the region of Palestine.

Jesus was sentenced to death by the Roman governor by using a form of capital punishment called crucifixion. He was nailed on a cross and hung from it until his death around 30 C.E. After his death, he rose back to life and his resurrection provides a way that people can be reunited with God.

The term Good Friday has evolved over the years. This English phrase “Good Friday” came from the Old German name Gottes Freytag which in origin also means “good” or “holy” Friday. In the present time, the Germans know the day as Karfreigta, which means “Care Friday” or “Friday of the Mourning”. Other nicknames for the day include “Black Friday” or “Sorrowful Friday”. Every country has its versions of how they call this day.

In Norway, it is called Langfredag.

In Finland, they call it Pitkäperjanti, both of which mean Long Friday.

In Sweden, it is also called Long Friday. It is presumed that this name came about in credential to the days of many and lengthy religious services.

In Spain, it is known as  Viernes Santo or Holy Friday.

Most of the time and up to the present,  the day is referred to as Holy Friday or Great Friday.

Regardless of what would be the perfect term to use, it will remain as Jesus Christ’s greatest sacrifice for mankind. Giving His whole life until death, and rose back and became unified to people who believe in Him.

Are you still confused about the reason behind “Good Friday” when this day is all about Jesus Christ’s death by offering His life for everyone? Why not call it “Bad Friday” or other similar terms?

The term “good” is being debated by a lot of Bible experts. It mentioned that it was developed through an older name which is “God’s Friday”. They merely mean suffering, and death of Jesus, as terrible as it was, and manifest the dramatic climax of God’s plan just to save His people from their sins. The day of suffering, pain, sadness, and blood at the cross is “to demonstrate at present His righteousness, that He might be just and the justifier of the one who has faith in Jesus.” (Romans 3:26).

To obtain a deep definition of Good Friday, it was explained that the suffering and death of Jesus to save His people had to happen for us to receive the joy of Easter. It is a fulfillment of God’s grace, to know Him, follow His words, and take action as a huge start of Good Friday. It is the perfect sacrificial substitute to have the forgiveness and salvation of Jesus, be poured out to the world.

Everyone will receive divine forgiveness, mercy, and peace because God took our punishment which is the result of His virtue against sin. The joy that was set before Him endured the cross, despising the shame, and has sat down at the right hand of the throne of God.” (Hebrew 12:2). It marks the day of pique and compassion connected at the cross.

Commemorating Jesus’ death is usually performed through activities to demonstrate how to be grateful for God’s grace. Here is a major list to begin with.

There is only two-component in which may require in preparing for God’s greatest sacrifice:

Symbols and Customs of Good Friday

These are the main elements that focus only on Jesus towards His suffering and the result of reminiscing His existence:

Good Friday Celebration around the World

The followers and believers of Jesus Christ have their way to celebrate Good Friday and memorialize the salvation of it. Most of these countries declared that Good Friday is a Public Holiday. Let’s learn some of their countries rituals and traditions:

In Australia and The United Kingdom, similar things are focused on the Ritual of Fast day by eating small meals, but no meat at all. Some can change the meat to fish and churches have many special services. Also, they get long prayer vigils. Traditionally, people eat hot cross buns on Good Friday.

In Singapore, they like to gather with family and friends and celebrate to eat delicious food. Their main course is a lamb in which they believe that Jesus is the Lamb of God. God gave Jesus to be killed like a lamb for our sins so people could live forever.

The Philippines and Mexico similarly marked Good Friday with the ritual crucifixion and other blood-soaked reenactments of Jesus Christ’s suffering until the final moment before His death. Thousands of tourists and devotees flock to watch the spectacle each year. A solemn day when churches are often draped in dark colors.

In France, they treat Good Friday as a fast day in which they can only eat one full meal without meat. French families would eat fish, and sometimes this day was known as “Fish Day”.

In Rome, London, and Italy, the Passion will start at 6 pm, Stations of the Cross at 9 pm, and they will see the Pope traverse Saint Peter’s square, and pray. Religious service called crucifixion is performed in Victoria Street. It has a universal service, which means for everyone. The famous performance is The Way of the Cross in Rome, Italy.

In Germany, it was known as Karfreitag. The word Kar comes from old German Kara means sorrow or grief. They traditionally have no church services, no bells are supposed to ring, no songs are sung, and no music should be played like the day Jesus was crucified.

In Jerusalem, the exciting part of the celebration is by following the Old City Path and retracing the 14 stations of the Cross. Traditionally, Christians follow the footsteps of Jesus leading to the site of the crucifixion.

The “Goodness” of Good Friday

Good Friday is realizing the importance of the sacrifice of Jesus to be extremely valuable. He left the physical world but always present spiritually.

There are many things to consider like having strong faith in God, believing with your whole heart, being a follower, and many more which inevitably draws you closer to Him. All the pain, suffering, sorrow, and blood of Jesus will be poured of love. Jesus said, “Father, forgive them, for they know not what they do. And they cast lots to divide his garments”. (Luke 23:34)

Then, everything changes to “It is finished”. There is nothing more to be done concerning salvation and gratitude with a perfect and fully reunited with God.

Good Friday was a single day of Jesus’ life. The first time that He stepped onto the world, Jesus suffered the physical, mental and emotional pain of human life while He was living in Nazareth.

It is better to say that Good Friday was a great act of a complete mission; conquered the darkness and sin.

John 11:25-26 Jesus said, “I am the resurrection and the life. Whoever believes in me, though he dies, yet shall he live, and everyone who lives and believes in me shall never die.