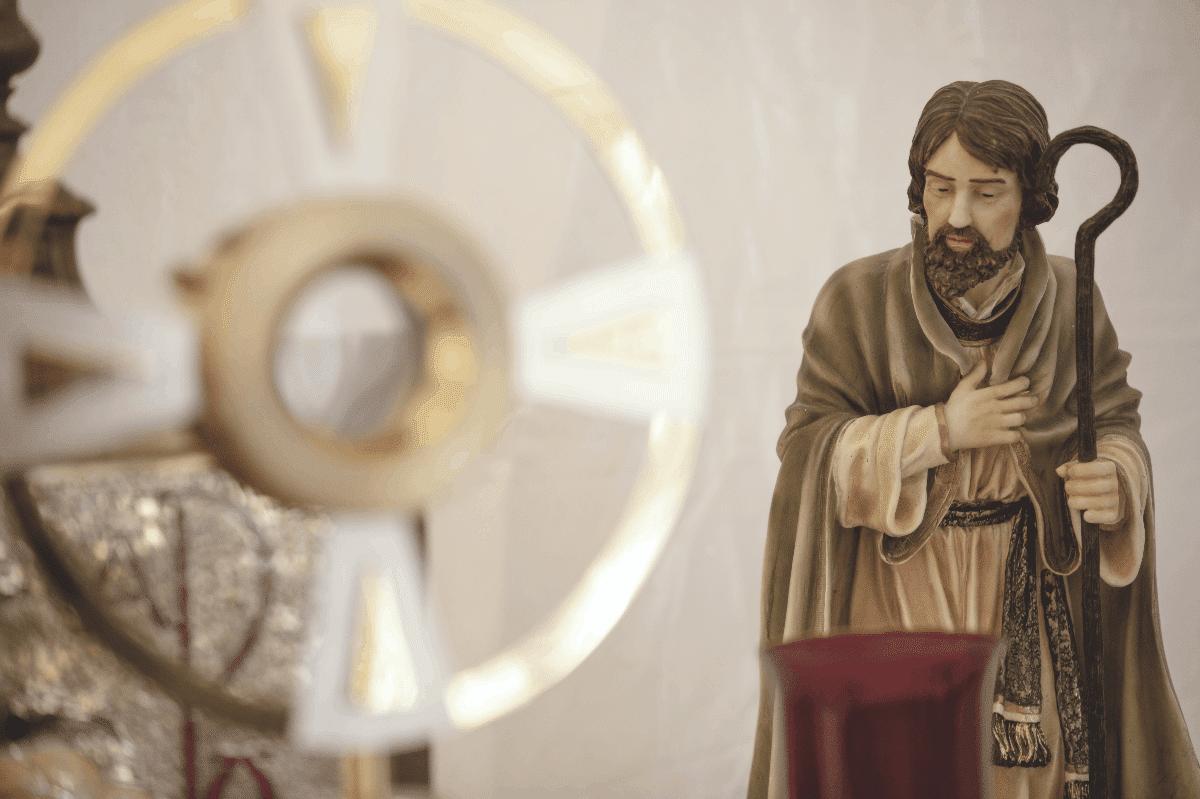 Nicodemus was a leading Pharisee and a member of the ruling council, but Nicodemus was searching and he believed that Jesus had the answers.

God focuses on seeking and changing people we regard as unreachable. It took a while for Nicodemus to come out in the open but God was patient with this “undercover” believer.

We know very little about Nicodemus. His story only appeared three times in the book of John. The first time when he visited Jesus at night. Second, when he appeared as part of the Jewish high council called Sanhedrin. Lastly, when he brought 100 pounds of costly spices and joined Joseph of Arimathea for Jesus’ burial.

Nicodemus is an intriguing person in the Bible. There is a lot we don’t know for sure, but at least we know that he left that evening’s encounter a changed man. He left with a whole new understanding of both God and himself.

Who was Nicodemus in the Bible

Have you thought about who was Nicodemus in the Bible?

Just like Lazarus, Nicodemus does not have a significant role from a biblical historical perspective. He was only mentioned three times in the Gospel of John. God used the private conversation with Nicodemus to show how to have a personal relationship with Him.

Pharisees vowed to obey all traditions and applications of the laws of God. However, these traditions and their interpretations had become as important to them as God’s law itself. Jesus did not condemn what the Pharisees taught. Jesus rebuked the hypocritical attitudes of these religious leaders.

The Pharisees were a group of Jewish leaders whom Jesus and John the Baptist often denounced for being hypocrites. The Pharisees saw themselves as an elite group that alone had the truth. They resisted the truth about Jesus because it wasn’t theirs, to begin with.

Nicodemus is described in John 3:1 as a Pharisee and a member of the powerful Jewish high council called the Sanhedrin. The Sanhedrin is known as the supreme court in ancient Israel.

Nicodemus is one of the few Pharisees who believed in Jesus. He was a Pharisee who was attracted to Jesus’ character and miracles.

Nicodemus was also a rich man and held a prominent position as a leading Pharisee. Although conversations between Jesus and the Pharisees tended to be antagonistic, Nicodemus knew that there was a greater truth to be discovered.

Nicodemus in the Gospel of John

Here’s an account of the few times Nicodemus was mentioned in the Gospel of John.

In John 3, Nicodemus is identified as a Pharisee who secretly approached Jesus at night. Why at night? Presumably, because he was afraid of what his peers would say about his visit.

The second time he was mentioned was when he defended Jesus from the Jewish council (John 7:50-51). Most of the Pharisees hated Jesus and desired to seize Him. Nicodemus had become a secret believer, and he risked his reputation when he spoke in favor of Jesus.

The final mention of Nicodemus in the Bible was after Jesus’ crucifixion (John 19:39). He brought 75 pounds of perfumed ointment to be used in preparation for Jesus’ burial. The perfumed ointment, which was made from myrrh and aloes, indicates that Nicodemus had great respect for Jesus.

Nicodemus and Joseph of Arimathea

Joseph of Arimathea and Nicodemus were both wealthy and honored members of the Sanhedrin. They were also both secret followers of Jesus, changed in the process of Jesus’ death. At first, they were afraid to make their allegiance known because of their high positions in the Sanhedrin.

Nicodemus and Joseph of Arimathea had to hurry to bury Jesus to avoid working on the Sabbath. Nicodemus assisted in wrapping Jesus’ body and carrying it to the tomb. The expensive spices he brought are proof that he is indeed a wealthy and powerful man.

Just like Joseph of Arimathea, Nicodemus boldly took a stand that could have cost him his position in the council. They risked their reputations and courageously stepped out to provide for Jesus’ burial. They came out of hiding to give Jesus the proper burial. Their actions proved how they are willing to give up everything for Jesus.

Nicodemus’ encounter with Jesus made a big impact on his life. From secretly meeting Jesus, to defending Him in the Sanhedrin, and until he came out in the open and helped Joseph Arimathea bury Jesus – he probably got a lot more than he expected. Here’s a rundown of the journey of Nicodemus with Jesus the Messiah.

Why did Nicodemus approach Jesus at night?

The scriptures don’t tell us why Nicodemus approached Jesus at night. Many predicted that he was afraid of being discovered by his peers. Or maybe he was scared of what they would say about his visit. Here are some of the other hypotheses.

Whatever the reason is, he left that evening with a whole new perspective about the Kingdom.

Nicodemus was an intelligent and learned teacher but he came to Jesus to be taught. He knew in his heart that Jesus had the answers about the great truth. He suspected the young teacher might be the Messiah promised by God to Israel.

As Nicodemus came to speak with Jesus, he was immediately confronted with the truth that “he must be born again”(John 3:3). Nicodemus took Jesus’ words literally and questioned the reality of physical rebirth. He got more confused when Jesus explained the importance of spiritual rebirth, saying that people can enter the Kingdom by being spiritually reborn.

When Jesus saw that Nicodemus seemed incredulous, Jesus gently corrected him. Nicodemus was a Jewish teacher of the Bible who knew the Old Testament thoroughly and yet he didn’t understand these things. But Jesus wanted to pursue Nicodemus and his character.

As Jesus gently explained to Him the contrast between physical rebirth and spiritual rebirth, Jesus also reminded him of the story of Moses in the Old Testament and the Bronze Serpent (Numbers 21:4-8). Jesus taught Nicodemus the great truth that God didn’t send Jesus to condemn and judge the world, but rather to save the world from their sin (John 3:16).

The next time we encounter Nicodemus in the Bible was when the Jewish leaders desired to seize Jesus. They were so jealous of Jesus because, despite the many trivial laws they put up, they couldn’t find one reason to arrest Him.

When the Pharisees were planning to kill Jesus, Nicodemus boldly made a statement questioning their failure to keep their own laws (John 7:51). Nicodemus spoke indirectly for Jesus risking his reputation and high position in the council. Apparently, he had become a secret believer in Jesus.

What did Nicodemus Learn from Jesus?

A well-educated teacher himself, Nicodemus knew that he needed to learn more from this promised Messiah. He left that evening a changed man, with a challenge to a new life. What do you think Nicodemus learned from Jesus?

The final mention of Nicodemus in the Bible was after the crucifixion (John 19:39). Nicodemus came out of hiding and assisted Joseph of Arimathea in burying Jesus. He brought with him seventy-five pounds of expensive perfumed ointment made of myrrh and aloes to anoint Jesus’ body after his death.

Nicodemus and Joseph of Arimathea are two of the four people who were changed in the process of Jesus’ death. They were transformed more by Jesus’ death than when He was alive. Their realization of who Jesus was brought out their belief, proclamation, and action.

Other Facts about Nicodemus

There are other insights about Nicodemus’ motive when he made an appointment to see Jesus at night. Some say he’s kind of a spy as there is no clear statement about his faith and trust in Jesus. On the other hand, others can prove that he is honestly seeking God.

Nicodemus, not a Spy

Some scholars of the Bible question the real motive of Nicodemus’ visit to Jesus. They claimed that he came as a kind of spy for the Sanhedrin. They insist that he is tasked as a representative of the high council to trap Jesus. So is he really a spy?

Most of the Jewish officials challenged Jesus publicly. So why did Nicodemus sneak through the night to visit Jesus?

He acknowledged that Jesus comes from God as a teacher. Is this the language of a disapproving inquirer?

After Jesus’ death, Nicodemus is no longer acting in secret as he came out in hiding and helped in burying Jesus. Are you a secret believer?

Nicodemus is one of the characters in the Bible with a personal encounter with Jesus in between. On one hand, he’s a Pharisee associated with people who have deep resentment toward Jesus. On the other hand, the questions he asks at his encounter with Jesus are not intended to trick or catch Jesus like how his peers question Jesus.

Seemingly, he showed genuine respect for Jesus’ character and miracles. Although he could have sent one of his assistants to see Jesus, he came personally. He genuinely sought Jesus to examine Him for himself. By the time of Jesus’ crucifixion, he is bold enough to speak for Him.

The decision of Nicodemus to visit Jesus at night is the first sign of him being a fearful follower. He believed that Jesus had the answers to his questions, but he feared being exposed to his peers. He feared that he might lose his position in the high council, but he also feared that he’ll not be able to know the Messiah.

Nicodemus is limited by his fear of being publicly exposed as Jesus’ follower. The tension between the fear of man and our faith in Jesus is what’s keeping us away from God. We have the seeds of faith in Jesus but we don’t allow these seeds to come to fruition because of fear.

Nicodemus’ secret visit to Jesus that night made an impact on his life. Here are some of the life lessons from Nicodemus’ life.

We know little about Nicodemus but his life had a significant impact on the story of Jesus. He came to be taught even though he was already a learned teacher himself. His encounter with Jesus is the perfect embodiment to have a personal relationship with the Messiah. Since he’s a member of the high council, he could have sent one of his assistants to see Jesus. But he came to see Jesus personally, he wanted to examine Jesus for himself.

Just like Nicodemus, Jesus will not stop pursuing us until we are transformed. He wants us to make a bold move as we continue to grow spiritually. God looks for steady growth, not instant perfection.