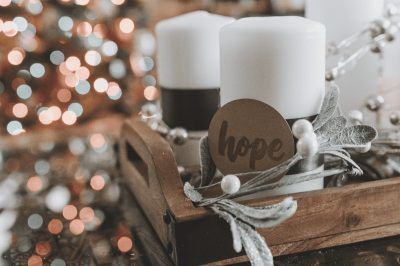 In 600 AD, Advent was declared by Gregory the First to start four Sundays before Christmas day. Whether your church celebrates lighting four candles or other ways, chances are you’ve heard of Advent. Advent is one of the major seasons celebrated by most Christian churches in the Western tradition.

The early church understood the importance of how time plays a large part in orienting our identity. They wanted to make sure that people would only focus on one thing. The earliest Christians should keep themselves focused on who they were: the people of God awaiting their risen Lord.

Let’s see the greater significance of Advent as we take in the sweeping panorama of time – from Christ’s birth to his Second Coming. The magnificent vision of life and hope is what the season of Advent brings to us by Jesus.

The Advent season is a four-week period celebrated on each successive Sunday leading up to Christmas. It usually starts on the fourth Sunday before Christmas.

Most Christians observe this holiday season as a time of expectant waiting and preparation. This season is both the celebration of the Nativity of Christ at Christmas and the return of Christ at the Second Coming.

Advent for Western Christianity is the beginning of the liturgical year. Advent season is also practiced in Eastern Orthodoxy for the 40-day Nativity Fast.

Advent came from the Latin word “adventus” which simply translates “coming“. It is also a translation of the Greek word parousia which means “arrival“. This means the coming of Jesus into this world. Scholars believe that the word “coming” in Advent has these meanings.

First, Advent is the season of preparation for the baptism of new Christians. Second, Advent celebrates God’s incarnation represented by the visit of the wise men (Matthew 2:1). Third, Jesus Christ’s baptism in the Jordan River by John the Baptist (John 1:29). And fourth, Advent is the celebration of His first miracle in Cana (John 2:1).

While we view Advent as a joyous occasion, it is intended to be a season of preparation much like Lent. Christians need to be in prayer, repentance, and fasting during this season. Advent is not as strict as Lent but it is meant to be a period of self-preparation.

Part of the observance of Advent is the anticipation of Jesus’ birth as written by prophets like Isaiah in the Old Testament. This is what Christian theology calls the “First Coming“.

On one hand, they also believe Jesus’ return at the end of days. They believe Jesus will return to set things right in the world, erasing death and suffering. This concept is what they call the “Second Coming“. During this Advent season, it is best that we set aside a time of quietness and austerity. Advent is a reminder for Christians to be encouraged and wait for the “Second Coming”.

This holiday season has its own unique symbols and traditions. These symbols will serve as a reminder to focus our eyes on the coming of Jesus Christ. Traditions associated with Advent include keeping an Advent Calendar and lighting Advent candles.

The tradition of the Advent calendar has been around since the nineteenth century. German Protestants adopted this as a way to mark the days of the season leading up to Christmas. They made markings of 24 chalk lines on a door and rubbed one off every day in December.

Advent calendars for Christians carry an underlying spiritual message of anticipation and hope. It can be a valuable aid for Christian families. An advent calendar helps us remember and reflect on the coming of Jesus Christ.

Advent calendars customarily begin on December 1 and count down the days until Christmas day. In the 1900s, the paper calendar was first popular in Germany.  German printer called Gerhard Lang was the most famous and popular early maker of printed Advent calendars. The first calendar with ‘doors’ was made in the 1920s. These included a devotional picture or Bible verse hidden behind each door.

Eventually, the Advent wreath was created out of evergreens. Evergreens symbolize everlasting life in winter as the evergreen is continuously green. The ring is a reminder of God’s unending love and the eternal life He makes possible. Four candles are often nestled in the Advent wreath. A new candle is lit each Sunday leading up to Christmas. Advent candles are a reminder that Jesus came as Light into a dark world.

The tradition of Advent candles coincides with the themes of each week of Advent.

The first candle also called the “Prophet’s Candle” symbolizes hope. It shows how the prophet Isaiah waited on the Messiah in the Old Testament.

The second candle is called the “Bethlehem’s Candle” and it represents faith. The Messiah was foretold to be born in Bethlehem just like King David.

The third candle is the “Shepherd’s Candle” and signifies joy. It shows the shepherd’s great joy that Jesus came for humble and unimportant people like them.

The fourth candle is called the “Angels Candle” and it represents peace. The angels announced the peace that Jesus would bring. It is a reminder of the angel’s message: “Peace on earth and goodwill toward men”.

Sometimes there is a fifth candle and it is placed in the middle and lit on Christmas day. It is called “Christ’s Candle” and it symbolizes light and purity.

The four Sundays of Advent are not complete without the Jesse tree. Families enjoy the tradition of the Jesse tree which focuses on God’s thread of redemption. This tradition originated in the medieval church in the form of carvings and stained glass windows. These are usually placed in Churches to assist people in understanding the Bible.

What do the four weeks of Advent represent?

The four Sundays of Advent are celebrated with a specific theme or focus. Each theme is designed to spend time reflecting on the true meaning of the season – the life of Jesus Christ. The purpose of this season should be to come before God with a sincere heart and to worship Jesus Christ. In the observance of Advent, churches led their congregation through Advent Readings. The tradition includes reading themed Scripture each Sunday of Advent.

The word hope implies we don’t have control over what will happen. But hope in a Biblical sense is very different. Hope as written in the Bible exists as security assurance. Hope, in the Bible, means trust placed in a trustworthy God. Hope is important during these times of trials and distress.

Like the prophets in the Bible, we anticipate our Savior’s arrival. We hope for a Messiah to deliver us from slavery to sin (Isaiah 9:6-7). In the Old Testament, the Israelites yearned for a Messiah to save them from their enemies. And the One who will ultimately save them from their greatest enemy: their sin. Week one of Advent honors that longing. It is a reminder for us to contemplate His coming and to reach out to Him knowing that He will lead us through the darkness.

During this week, Christians light the first candle. The “Prophecy Candle” is colored purple which symbolizes hope.

The second week of Advent signifies the preparation for the coming of Christ. In Luke 3:4-6, John the Baptist prepares the Way for Jesus. John advised his listeners to make their lives ready so the Lord could come to them. This week is a reminder of the messages of repentance and forgiveness that John the Baptist preached as he prepared the way for Jesus.

During this week, the second candle is lit and also known as the “Bethlehem Candle“. This candle is also colored purple and represents faith. It is a reminder of the birth of Jesus the Messiah.

The third Sunday is a reflection of the joy that comes through Jesus’ birth and through the salvation He has gifted us. This week is considered the turning point of Advent. It was where Christians moved from hope and preparation to rejoicing. The spirit of Advent lightens beginning the Gaudete Sunday. Gaudete in Latin means “rejoice“.

In Philippians 4:4-5, we celebrate the passage of this week to “rejoice” for “indeed the Lord is near.” The ultimate joy comes from Christ dwelling within us. Christ is near and we will fully realize this ultimate joy on His second coming.

The pink candle is used during the third Sunday of Advent. The “Shepherd’s Candle” highlights the joy the shepherds experienced when they received the good news about Christ’s birth. The ultimate joy in Christ is vital to the Christian experience.

On the fourth Sunday of Advent, churches light the love candle or the “Angel’s Candle”. They light the final purple candle to mark the final week of prayer and penance awaiting the birth of Jesus. The last week leading up to Christmas, Christians focus on God’s love and prepare for the Good News.

In addition to the love candle, some churches also light the “Christ Candle“. This candle is usually placed at the center of the Advent wreath. Churches have this candle traditionally lit on Christmas day or Christmas eve.

This candle is colored white which symbolizes purity and blamelessness. It is a representation of the role of Jesus in the Christmas story. His arrival on this earth as a baby shows how Jesus brought light into this world.

Advent is a time to be more involved in the meaning and the possibilities of life as a Christian community. It is a reminder to prepare not only for Christmas but also for the Second Coming of Jesus Christ. It means to be awake and watchful when He comes again. Jesus should not find us asleep. The Advent season should be all about our hearts and minds focused on Jesus.

The celebration of Advent can be a time for families to start a tradition. This can be a time to share the words of God, especially with children. Share stories about how Advent begins for the young generation. The true meaning of the season of Advent is to celebrate the hope, peace, love, and joy of Christmas.

AUTHOR
Alex Shute
Alex is a family man and entrepreneur based in Los Angeles. His passion is to serve the global Church and bring people of diverse backgrounds together to learn & grow. In his free time, he enjoys perfecting pour-over coffee, smoking meats, and discovering new cycling routes around Southern California.

As an Amazon Associate, I earn from qualifying purchases.